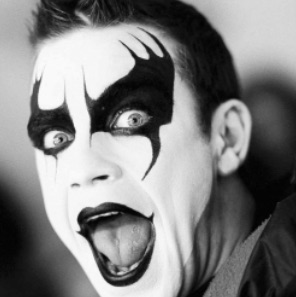 Robbie Williams, singer & UNICEF ambassador, ignored months of appeals to comply with the cultural boycott of Israel & performed today in Tel Aviv. Turns out his manager is a UNICEF official so playing jester to apartheid advanced his personal interests.

Now we can feel free to speak the truth about his music. England has some explaining to do for making this guy famous. His genre has still not been defined but it’s somewhere between Raucous & Rubbish. In rock & roll, performers compete with costumes to outdo each other in outrage. Even here Williams is no rebel & dresses like Gene Simmons & KISS. Why? When the original is so cheesy?

They say the lyrics to his most famous song “Let Me Entertain You” are mostly innuendoes & double entendre. That’s another thing England will have to explain. The eroticism eludes the libido’s perception.

When we read he performed for Betty Windsor at her Diamond Jubilee concert in 2012 we should have seen it coming like a Mack truck & maybe saved our breath. Any rock & roller who wears the jester’s outfit for the moochocracy is all washed up as a rebel. As his ugly-assed song “Let Me Entertain You” drools, “I’m a burning effigy of everything I used to be.” He’s got that right.

The reviewer for Haaretz thought the concert today stunk. He said It was “two notches below that of Justin Timberlake at the same venue.” Ouch! He also complained about seeing too much of William’s armpits. Really!? And we thought he was all ass.

(Photo is the regrettable effigy)