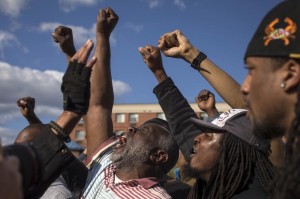 Media coverage of Baltimore is disgraceful & carefully structured to present the Black community & protesters in a deeply hateful way. They had one young man, whose dad yanked him out of protests, tell the reporter that at least he knew who his dad was, unlike most other kids. They had people talking proudly about those involved in cleaning up the mess when the pharmacy was trashed–a good Black people versus thugs feel-good moment, pitting Blacks against each other. And over & over again, they strut the guys from the group 300 Men March who promote the view–so much in vogue among conservative Blacks (like now shamed Bill Cosby)–that violence in the Black community is due to irresponsible, mother-emasculated, sexed-up men. That’s why at their marches, which are more protests against other Black men & teens than against the war on Black youth, you see the mayor & police chief as keynote speakers.

Media interviewed some people on the street who were so eloquent in protest that one wonders why they aren’t put on TV to explain what’s going on. If one really wants to get at the truth, that’s exactly what you would do rather than ask idiotic mumble-mouthes like David Brooks from the New York Times who knows nothing & speaks at great length to prove it.
Brooks was completely nonplussed (in others it would be called playing dumb but stupidity is completely genuine with him & he reeks of racism) about how to address poverty since he claims millions of development & social welfare money has been thrown at the Black community in Baltimore. He also pulled out the old canard about “Black on Black violence,” another favorite theme of 300 Men March.

It’s true that since the 1970s millions of dollars of development money have poured into Baltimore–just like most major US cities. And just like everywhere else, it was to build convention centers, trade centers, upscale retail malls, aquariums, museums, sports stadiums, tourist attractions, upscale housing that displaced thousands of poor Blacks. If you look at the areas of gentrification (another word for displacement of the poor) in Baltimore, you will see that the area of social protest is affected. Homelessness is now a major problem.

As for that “Black-on-Black crime” crap? That’s a term used sui generis to the Black community & it’s a way to defame them as prone to violence. Where do you hear “white-on-white crime” spoken of, like it was a special category of crime? If you look at raw data on US murder statistics, several cities stand out, including Flint & Detroit, Michigan; New Orleans, Louisiana; Chicago, Illinois; & Baltimore, Maryland. All high unemployment cities after manufacturing jobs went overseas in search of sweatshop labor.

In 2013, of the 217 murders in Baltimore, 95% were by Blacks (204). That’s assuming one can trust the courts & police & that’s a very iffy proposition. The data actually doesn’t tell us who murdered who or why or in what circumstances. This is why media–if it really wants to understand & not just vilify–needs to dump ignorant, lying-assed commentators like mumble-mouth Brooks & invite some of the people they interviewed on the street who went straight to the point & know the score. They won’t improvise to suit social hatred.

It isn’t one bit apologetics or patronizing to recognize that putting human beings under sustained & acute economic, social, & political pressure will not bring out the best in them. The ruling elite has them just where they want them: not emasculated by their mothers, but demonized, cornered & isolated politically.

When 300 Men March direct their campaigns at Black men & boys rather than the power elite, they’re heading in the wrong direction; facilitating the divide & conquer strategy; justifying SWAT team terrorism against the Black community.

Once again, we stand unequivocally with the Black community in Baltimore, with no distinctions. There were massive solidarity protests in several cities & that is what has to become widespread & go international. The struggle against social hatred for our Black brothers & sisters in Baltimore is the struggle for the very future of humanity.

Photo is Black protesters in Baltimore.