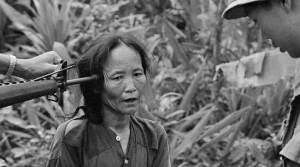 Re-posting this from two years ago because it explains the power of the anti-Vietnam War movement in conjunction with Vietnamese resistance to US military aggression. It was a transformative political era that broke the chokehold of the McCarthy Era in US politics.

It isn’t a matter of reliving old glories in politics but of drawing on the immensely important things activists learned about international solidarity, movement building, the role of veterans & soldiers.

Despite disagreement on when the Vietnam War began, 50 year retrospectives have begun–certainly several years too late since US “military advisers” (including CIA, air force, & naval assistance) were already present in 1950 in what was then called French Indochina, as a long-established colony of France. It goes without saying, the US was on the side of French colonialism. Though it is ancient history to many activists today, the Vietnam War was a political event of the greatest importance. Though touted by the US government as a war to contain the expansion of communism, the new activism broke the choke-hold of anti-communist hysteria & ended the McCarthy witch-hunt in the US. It was a continuation of the struggle against colonialism set back by both World Wars & by the Korean War. Millions of people around the world were propelled into political activism despite Cold War repression from the 1950s.

It was the only war in modern times (including WWII, the Korean War, & every war & occupation since) that was not censored. In an experiment that clearly went sour, the US “embedded” reporters–not as they do now to sanitize the wars–but to assist reporters in getting around the country. (The Pentagon official who devised that innovation probably died in ignominy, a lean & hungry fellow.) This short-lived innovation gave the media a way to claim their coverage of the war was instrumental in ending the war while they ignored (& sometimes red-baited) the millions around the world protesting the war. In fact, what many of us remember about media coverage is racist descriptions of the Vietnamese as “the enemy,” as communists trying to take over the world, & for the steadfast refusal to honestly report antiwar protests–if they bothered to report them at all.

The official narratives of the war are filled with uncertainties, more accurately called lies. Some accounts claim that between 1963 & 1964 up to 23,000 “military advisers” began pouring into the country & that US combat troops (eventually numbering up to 550,000) were not deployed until early 1965. In fact, the first of my three brothers to serve in that war was deployed as a US Marine in 1963. He was a working class grunt, not a “military adviser.”

The partition of Vietnam into two zones in 1954 was considered provisional & was an agreement reached in negotiations between the Viet Minh, representing the independence movement in Vietnam, & the French colonizers. The agreement came after several years of war; it is when French forces faced opposition to colonialism & the war at home & defeats on the battlefield by the Vietnamese that the US intervened with its so-called military advisers (though some would rightly call 23,000 military advisers a small army).

North Vietnam had a regular army experienced from 40 years of fighting the French. The Viet Cong were guerilla & regular forces in South Vietnam, both under the command structure of the North Vietnamese army. While the US used advanced weaponry, aerial bombardment including chemical warfare like Napalm & Agent Orange, search & destroy missions wiping out entire villages, & unspeakable violence against prisoners of war, the Viet Cong fought with crossbows, spears, booby traps, bamboo spikes, & mortars & automatic weapons captured from the French & US armies. Most importantly, they fought with the popular support of the Vietnamese.

One of the most remarkable features of the Vietnam War was the antiwar character of many US soldiers. Many US soldiers deployed in Vietnam openly opposed the war; hundreds of active duty GIs & veterans in the US actively organized against the war. Thus began the antiwar tradition still prevailing where veterans lead off antiwar protests–because of their unrivaled moral authority in exposing the atrocities of war. They do not seek to defend the indefensible but to expose it & build opposition to other wars.

Antiwar activists should join the retrospectives on the Vietnam War in the spirit of antiwar veterans & to rebuild the antiwar movement. And we should first of all make tribute to the Vietnamese who fought so valiantly against the mightiest military machine in world history, defeated the US militarily & kicked its ass out of Vietnam in 1975. We should tip our hats to the millions of activists around the world who marched & chanted against the war; some are still marching against other wars.

This woman is a Viet Cong suspect being questioned (in the spirit of Abu Ghraib) in 1967 with an M-16 rifle held to her head by a US soldier. Such interrogations were standard operating procedure in Vietnam.