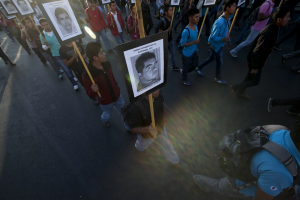 It was nearly one year & a half ago the Mexican military–which functions as an occupying force in its own country–disappeared 43 student teachers from the Ayotzinapa teachers college near Iguala, Mexico. After a phony investigation, the government of smooth-talking president Enrique Peña Nieto tried to declare the case closed. Only one of the students was found buried but in the search by family & volunteers, the bodies of 100 other unidentified disappeared Mexicans were found in the area.

The families of the Ayotzinapa 43 believe their sons may be held in secret prisons enduring torture & eventual murder & they have not ceased protests demanding the regime come clean about the fate of their sons & return them home alive.

Kidnapping & disappearing activists is one of the most monstrous methods used under neoliberal capitalism, the barbaric phase of capitalism. Tens, if not hundreds of thousands of people have been disappeared, tortured, & dumped in mass graves like rubbish. Somewhere near fifty regimes employ or have employed this method in the past several decades.

During the “Dirty War” in Argentina between 1976 & 1983, human rights groups estimate 30,000 were disappeared–including by taking them over the ocean & shoving them out of planes. In the Sri Lankan civil war of the 1980s, estimates are from 12,000 to 20,000 disappeared by the military. In Guatemala, over 45,000 were disappeared by the military between 1960 & 1996. In Kashmir, Indian military & paramilitary forces have disappeared over 8,000 (as of 2009). In Mexico, the estimates of disappeared since 2006 are between 26,000 & 30,000. (It doesn’t appear that Central American immigrants disappeared as they travel through Mexico to the US border are included in the estimates of the Mexican government.) Disappearing is also used as a weapon of war by the US in Afghanistan & elsewhere & appears to be the modus operandi of special forces like the Green Beret, who are nothing more than psychotic death squads valorized as heroes.

Disappearing people is a particularly heinous crime because it allows families no resolution to grief. Since the grief cannot be resolved until families have their loved ones back to bury & honor–& thus becomes more wrenching–the disappeared remain an active part of social struggle. They will haunt justice until it is addressed. Decades after the crimes, families display photo montages of those lost. They’re still showing such montages from the thousands disappeared by Franco forces in the Spanish Civil War in the 1930s & still demanding justice. It should also be considered a remarkably stupid crime because it forever indicts the regimes that use it.

As governments try to skirt & trash civil liberties in the so-called war on terror, they will employ more of this method since it short-circuits due process & prosecution for an actual crime rather than just protesting for justice. Educating ourselves & others about this vile crime is part of the struggle against it.

Our fullest respect & solidarity with the families of the Ayotzinapa 43 & with the Mexican people in their struggle to end military occupation which has also taken over 100,000 civilian lives, made Mexico an extremely dangerous country for journalists & Central American immigrants–but a paradise for drug traffickers.

Photo is protesters, including family members of the Ayotzinapa 43, at a Christmas Day rally in Mexico City.