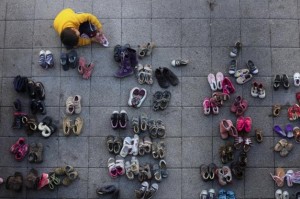 Here’s one of those things that lets us know the human race really is “all that.” A little refugee boy at the train station in Budapest is trying on shoes donated by people in Hungary–a country where 35 percent of the people live below the poverty line. The regime put up razor wire fences, shut down the trains, manhandled refugees before being forced to open the borders. But the people of Hungary are another story altogether.

The same human kindness & solidarity extended by working people in Hungary is given by Mexicans who rush with food, medical supplies, clothing, & well-wishes to meet the trains carrying Central American immigrants to the US border. People in Texas donated the same to a church providing for thousands of women with children crossing the US border & people in Indonesia offered hospitalities of all kinds to Rohingya refugees last May.

The spirit of solidarity is the most powerful political force in the world. It needs to be mobilized into an international political movement proclaiming “Je suis Aylan Kurdi” to defy the barbarisms of immigration policy everywhere.