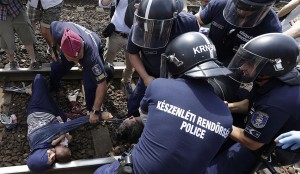 This is a refugee being manhandled & arrested by Hungarian cops. A swarm of riot cops to handle a woman & her child. Hungary tried to keep refugees from entering the country with razor wire fences, phalanxes of cops, & shutting down the trains, but were overwhelmed by the sheer number–estimated at 200,000 people.

Media reports that many apply for asylum in Hungary but “quickly try to leave for richer EU countries.” “Quickly” would be the operative word; it doesn’t appear refugees can get out of the country fast enough. It’s an EU country & a member of NATO so it has a big fat military budget draining the economy. It’s also under IMF discipline. That would explain why as of June 2015, 35 percent of the population live below the poverty line & why the government no longer reports poverty-related statistics. It doesn’t make capitalism look that good–especially with the photos of seniors battling riot cops against evictions.

The IMF reports that things are looking good in Hungary, that the “economy is growing at a strong pace helped by accommodative macroeconomic policies & improved market sentiment.” That gobbledygook just means they’re squeezing the bejeezus out of working people to feed the banks & there isn’t yet sufficient political resistance to thwart them.

Of course along with all that poverty comes political repression: Greece, Spain, Portugal redux. The extreme right-wing regime has framed a new constitution based on “conservative Christian values,” curtailed press freedom, increased attacks on women’s rights & LGBT rights, criminalized homelessness, & fomented racist hatred particularly against Roma who one leading journalist, given honors by the state, compared to monkeys. No one in their right mind would want to stay in such a country.

The heartening news is the outpouring of popular support for refugees–distinguishing the barbarism of EU regimes from the humanity of Europeans who recognize we’re all in the same boat now–a sinking ship if we don’t set EU & IMF officials afloat on a dinghy to hell.