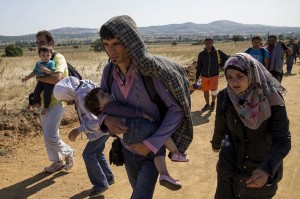 The drowning death of baby Aylan Kurdi & the overwhelming grief we witnessed in his father highlights the central place of children in the tsunami of refugees & immigrants all over this planet. And it also exposes the vicious, small-minded xenophobia & social hatred of politicians like Donald Trump, Bernie Sanders, Barack Obama, & the whole swamp of EU leaders who respond with walls & militarizing the borders.

We saw images of Rohingya women feeding their children after being adrift in the Andaman Sea for weeks without food & water; Central American women who managed to cross over 1,500 miles (2433 km) with small children; refugees from Syria, Afghanistan, Palestine, & elsewhere carrying children by dinghy, train, & on foot all the way north to Austria or on rickety boats to Australia.

It has to be a living hell for hungry, exhausted, frightened parents to not only protect their children but keep them from being traumatized by internalizing their parents trauma. What happened to baby Aylan, his brother & mother, is the nightmare they all dread.

So we should take a moment to honor these mothers & fathers–wherever they are headed. The highest respect we can give them is to demand of our own governments that they open the borders because immigration is a human right.

The photo is refugees on the road to Hungary.