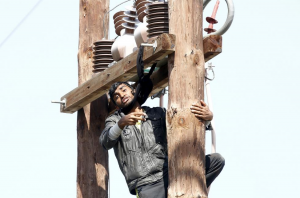 This Pakistani refugee is threatening to hang himself from a utility pole during a demonstration inside the Moria “registration center” on the Greek island of Lesbos. That’s what the Reuters caption says. Are we to think this man is simply overwrought & melodramatic?

Moria is not a registration center. It is a concentration camp where Afghans, Pakistanis, & other refugees deemed “economic migrants” are incarcerated in overcrowded, dehumanizing conditions without sanitation, healthcare, sleeping quarters. The conditions are so squalid that Doctors Without Borders pulled out, not wanting to be implicated in the barbarism, & perhaps not wanting their personnel to be beaten or bombarded with tear gas by riot cops along with the refugees. UNHCR, the UN refugee agency hasn’t been there much anyway but they pulled out so they could pretend it wasn’t happening to cover for the EU.

It’s time for international solidarity with refugees to form ranks, to activate beyond outrage, to set up pickets at embassies around the world demanding: Immigration is a human right. Open the damn borders.