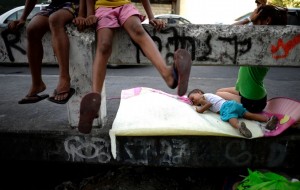 These are homeless children in Manila, Philippines, where it is matter-of-factly stated that a quarter of the country’s 98 million people live below the poverty line of one US dollar a day. In fact, last year the World Bank, in an act of inexplicable largesse, raised the poverty line to $1.90 a day using 2011 prices.

We could ask the World Bank to explain their actuarial calculations: like, why a measly $1.90 & why 2011 prices? But what’s the point when their poverty line hasn’t a shred of relationship to reality? What’s the point when their policies have created most of this poverty & they remain indifferent to it? They’re too preoccupied stuffing money into those Panama trusts.

We know exactly what the World Bank & IMF, in league with the local oligarchs, are up to in the Philippines: dispossessing tens of thousands of farmers & farm workers & replacing them with agribusiness plantations; driving them into urban slums to earn a living picking through toxic rubbish dumps; burning them out of those slums to make room for free trade zones, resorts, golf courses, & upscale shopping malls. It’s the matrix of neoliberal plunder everywhere.

The Philippines, despite repression, have an active political movement best known for its intransigent opposition to US military buildup in their country. Our deepest respect & solidarity.