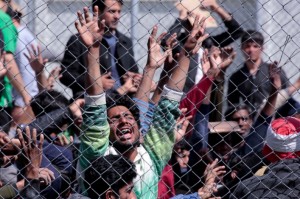 When the history/obituary of the neoliberal era is finally written, media will require special condemnations just as it merits a special place in hell.

Documentation for that claim (if any were needed): Yahoo identifies these men as Afghan & Pakistani “refugees” (& yes, inexplicably it used that term instead of “migrants”) protesting at the Moria detention center against their imminent deportation to Turkey. Although both Afghans & Pakistanis are being denied asylum as “economic migrants,” both are war refugees. Or does the EU deny years of US drone bombing in Pakistan & nearly 15 years of US-European occupation & bombing in Afghanistan?

The mangled Yahoo caption to this photo continues in cynical deceit: “Migrants who have arrived illegally in Greece are now being deported back to Turkey if they refuse to apply for asylum.” So in one inept verbal thrust, war refugees become what xenophobes like to call “illegal aliens” & are now accused of refusing to apply for asylum when they have been placed against their wills in a concentration camp & denied registration.

We better get busy on that obituary before the monstrous ways of modern capitalism destroy our humanity, teach us to turn a blind eye to human suffering, & take us all out with the militarism & plunder. For our part, we choose to stand with human rights & with these refugees who we consider our brothers & sisters.

Immigration is a human right. Open the damn borders. Grant them asylum.