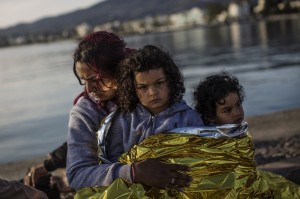 Thousands of refugees continue to arrive on the Greek island of Kos from Turkey which is only two-miles away. The Kos economy is based mainly on farming & tourism & reportedly is a favorite resort for Britons because of its historic ruins & beautiful beaches.

According to some British media, tourists are becoming quite disgruntled with the thousands of immigrants & are threatening to boycott the island. They’re tired of having to push luggage & bicycle past crowds of curious immigrants, having their view of the harbor obstructed, seeing laundry drying on guardrails, having their sunbathing disrupted, & seeing immigrants sleeping on benches & public streets. Hopefully that means they’ll go straight home & organize protests against the wars & violence perpetrated by their government which is causing this tsunami of fleeing refugees.

Some of the media coverage is indistinguishable from farce–so reminiscent of the hysterical propaganda (in both the sense of hilarity & panic) circulated during the McCarthy era in the US. Communists then were hiding in the bushes & putting fluoride in the water to corrupt the morals of youth. Now they report the “human trafficking” trade out of Turkey is thought to be controlled & financed by ISIS & that ISIS operatives are on the dinghies posing as refugees. Boogey men are everywhere.

They also report that in 2010, before US-NATO bombers took out Libya, Gaddafi demanded 5 billion euros a year from the EU to block the flow of immigrants from the North African coast to Italy or he threatened to “turn Europe black.” Media reports say that Gaddafi’s deeply repugnant proposal (which has only been reported in tabloids so could be fabricated or exaggerated) may be a key strategy of ISIS to crush the West. Of course nothing has proven more effective in creating massive immigration from North Africa than the US-NATO war against Libya.

Media report the claims of unidentified “European intelligence agencies” that ISIS has already started a “psychological attack” on Europe by flooding the continent with refugees using Kos as their entry point & ruining the vacations of white tourists. There are always new lows to white supremacist anxieties & derangement & to war propaganda–just when you think they can’t go lower.

It’s a pity that refugees are interrupting vacations in Kos. Lord we wish we cared. The photo is a Syrian woman with her children just rescued in a drifting dinghy offshore.