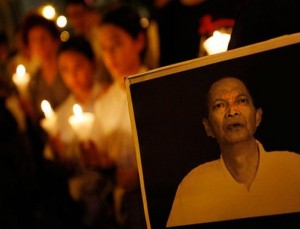 Li Wangyang was a worker in a glass factory & a democracy & labor rights activist in Shaoyang, China, who advocated & set up labor unions independent of Chinese government control. In 1989, he helped found a workers’ association to support the democracy movement throughout China that became known as Tiananmen Square & put a poster on a city traffic sign urging a general strike.

Following the massacre of activists by the military on June 4th 1989, Li organized a memorial for the victims. As a result of his activities, he was arrested & served 21 years in the Chinese gulag on charges of counterrevolutionary propaganda, incitement, & subversion. During that time, he was subject to hard labor, torture, beatings which caused blindness & loss of hearing, & solitary confinement.

In May 2011, Li was released for reasons of poor health & checked into a hospital for treatment of diabetes & heart disease where his devoted sister visited him daily. Despite the torture, Li was not cowed. “To accelerate the arrival of a democratic society, to accelerate the arrival of a multiparty system in China, I won’t retreat, even if it means I will lose my head,” he said in an interview shortly before his death.

On June 6th, 2012, his relatives found Li hanged in his hospital room, suspended from a thin ribbon around his neck. Officials declared his death a suicide–& there isn’t a single person outside the Chinese government stupid enough to believe that because Li was blind & had difficulty standing or moving without help. Li remained outspoken until his death in demanding vindication of those massacred at Tiananmen Square. He was murdered because he could not be broken.

Thousands of protestors marched in Hong Kong days after his death to mourn & honor Li & to demand a formal criminal investigation of his death. We should take a moment to honor this remarkable man. May he rest in peace; may his life & death keep us steadfast & inspire a whole new generation of freedom fighters not just in China but throughout the world.

Photo is poster of Li Wangyang at Hong Kong protest.