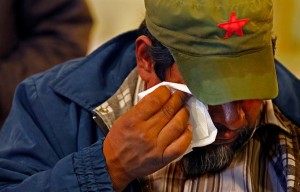 More than 50,000 farmworkers across Mexico’s Baja California peninsula (about 200 miles south of San Diego) have been on strike since mid-March against low pay, harsh working conditions including unpaid overtime, & labor abuses including sexual abuse. An estimated $80 million of produce, mostly tomatoes & strawberries slated for export to US supermarkets, rotted in the fields while strikers demanded health benefits, overtime pay, days off, water, work breaks, an end to arbitrary firings & abuse by field bosses & for wages to be raised from US $8 to $10 a day to about $20. Very modest demands when a pint of strawberries sprayed with pesticides sells for $4 to $5 a pint in US markets. The strike crippled the Baja state’s agricultural export economy.

The farmworkers have now accepted a settlement, which is hardly optimal, including an average $4 a day wage increase. The Mexican labor department helped negotiate the settlement & pledged to ensure agribusiness compliance because it needs to protect its agribusiness export economy & assure investors Mexico is a safe haven for super-exploitation. Mexico is where agribusiness first employed the neoliberal methods of the so-called Green Revolution & is a showcase of land expropriations from small farmers, chemical farming, & cheap & child labor.

Fidel Sanchez, the farmworker negotiator shown here (overcome with tears at the end of the strike), & some other strike leaders were farmworkers in the US for different periods of time. Without an ounce of sarcasm, media reported that after labor activism in US fields they became more militant & less tolerant of rotten labor conditions in Mexican fields. They certainly didn’t learn their militance from the US labor movement but from organizations like the Coalition of Immokalee Workers (CIW) which employs consumer boycotts & other pressure tactics against agribusiness, fast food joints, & supermarkets. The US labor movement couldn’t even get off its ass in 2012 to oppose the use of child labor in US agribusiness or to implement safety & protective laws for them. Over 800,000 child farmworkers work without water, with pesticides, using dangerous tools, & around livestock.

In truth, the US labor movement may have learned much more from the immigrant workers since many militant striking teachers & miners from Mexico were forced to flee here against threats of violence & death after their role leading strikes. And that remains a problem for Sanchez & the other strike leaders–highlighting their immense courage & our need to maintain vigilance lest a consumer boycott & other political actions become necessary in their defense against the Mexican government & agribusiness.

Our deepest respect to the farmworkers of Baja & to their leaders. Their intransigent stand against agribusiness has the potential to inspire others–& not just farmworkers.

(FYI: Driscoll’s is the US strawberry distributor most involved in this strike.)