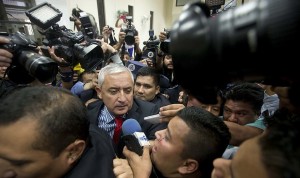 The now deceased acidic wit Tom Lehrer once said “Political satire became obsolete when Henry Kissinger was awarded the Nobel peace prize.” Well maybe Lehrer had a point but society is so chock-full of sarcasms & obscenities that some days you just scratch your head & wonder if insanity isn’t the preferred state of consciousness.

But those business leaders & church officials are really shaming themselves something awful. The man’s been accused for years of unspeakable human rights crimes & they’re just now going after him for stealing!? Pérez, who was a general trained at the School of the Americas, has repeatedly been accused by authoritative bodies (including US National Security Archives & Guatemalan indigenous organizations) of genocide, torture, mass rape, assassinations, & other atrocities against indigenous Mayans during the scorched earth campaigns in the 1980s under military dictator Efrain Rios Montt. Over 200,000 Guatemalans were killed or disappeared during the conflict.

Rios Montt, another general, graduate of the School of the Americas, & president of Guatemala, was prosecuted in 2013 for torture, genocide, illegal imprisonment, & state-sponsored terrorism. Despite wrenching testimony from Mayan women about mass rape, disappearances, mass murders, it was clear from the legal maneuvering that he would walk. He was protected by a judiciary up to its eyeballs in his dictatorship as well as then president Pérez. If Rios Montt was found guilty our man Pérez, as a general under Rios Montt, would be implicated as well.

So now Pérez is headed to court for customs fraud. Even if it amounted to the billions it is small change compared to the crimes he committed against the Mayan people for which he & Rios Montt have not & are not likely to be held accountable. Rios Montt is 90-years-old & Pérez only 64 but justice will require a revolution in Guatemala that expels the US military forces behind the scorched earth policies & establishes an entirely different kind of society–one that is worthy of the Mayan people & run by them.

Photo is Pérez after resigning as president as he arrives at court to face charges.