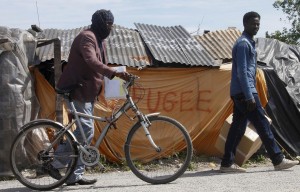 The Guardian-UK, that bastion of progressive media, posted this photo of a camp set up by immigrants in Calais, France where they’re gathering to make their way without papers through the Channel Tunnel to Britain. The caption read: “Migrants walk past a shelter at a makeshift camp known as the jungle.” Known by whom as the jungle? Certainly not the immigrants.

One stands aghast at the primitive social Darwinism of the Guardian. If they’re going to resurrect jungle as a metaphor for savage & subhuman, let’s take a look at the officials of neoliberalism, the barbaric phase of capitalism. Let’s take a look at the US government & its savage wars; at the European Union (EU) letting thousands of refugees drown in the sea & leaving thousands of Rohingya drifting in death ships without sending aid; at Israel bombing Gaza into smithereens; at the EU & IMF trying to bleed the people of Greece to make an interest payment on a loan. Now we’re talking savage!

We apologize to our brothers & sisters for the primitive idiocy & ugliness of our so-called leaders. We welcome you in the hopes you can join us & kick their asses from here to Kingdom Come.