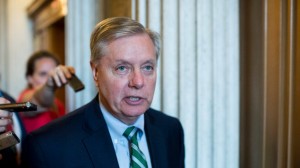 Lindsey Graham, the US senator from South Carolina, usually looks like he’s half in the wrapper & when he opens his mouth to speak he emits sounds more often smothered in the nether regions–& just as unseemly. But even if he hung off the sauce our man is a loser in the battle of wits & proof-positive that racism makes you stupid.

Last week he claimed the murder of nine Black worshippers was an attack on Christianity. Yesterday in a speech about the massacre on the Senate floor where the chamber is usually half-asleep, he said, “That’s Mideast hate. That’s something I didn’t think we had here but apparently we do.”

Boneheads like Graham show the power of wealth & privilege in US politics because on a fast food job, he’d be the guy scraping swill.

(Photo of Graham by Bill Clark/AP)