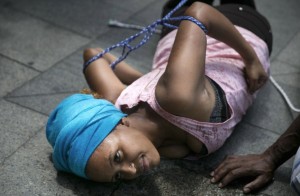 This woman is an Eritrean refugee protesting outside the meeting of a European Union (EU) delegation near Tel Aviv, Israel. (Apparently the EU doesn’t honor the boycott of Israeli apartheid though it could just as well have met in Belgium.) The media caption said “Eritrean migrants living in Israel” were calling on the EU to act on the recent 500-page UN report citing the Eritrean government for systematic use of extrajudicial killing, torture, rape, indefinite national service & forced labor. She is demonstrating a torture technique used in Eritrea.

Actually, there are an estimated 45,000 Eritreans & Sudanese who sought political sanctuary in Israel while others flee across the Mediterranean Sea to Europe. The UN report said countries should provide refuge to Eritreans & establish procedures for incorporating them into society. Is Israel as a Jewish-only state exempted from UN guidelines & ancient human practices of sanctuary? Does Zionist exceptionalism allow Israel to continue jailing Eritreans & other African refugees & deporting them to Uganda & Rwanda to elude accusations of barbaric immigration policies? These are the sarcasms of Israeli immigration policy which continues to recruit Jews from around the world for aliyah & resettlement but denies refuge to those fleeing war & persecution.

Immigration is a human right & Israel is no exception. Open the borders! Stop deporting refugees!