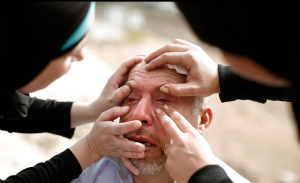 This photo which appeared in the LA Times last week is a Palestinian man receiving first-aid after being pepper-sprayed by Israeli occupying forces at a weekly protest “against the neighboring Jewish settlement of Halamish.”

The LA Times doesn’t tell the whole story of course but it’s extremely unusual for such photos to appear in media which more typically portray Palestinians as aggressive youth. The whole story is more than worth telling.

Halamish was taken in a land grab of Palestinian farmlands in 1977 & continues to expand in outposts. In 2009, when settlers fenced off a vital spring on land privately owned by Bashir Tamimi, residents of nearby Nabi Saleh began weekly protests against the annexation of their farmland. This man is one of the Nabi Saleh protesters.

Though residents were committed to peaceful protests, they were met met by Israeli soldiers using tear gas, rubber bullets, water cannons, & skunk bombs. Skunk bombs are a chemical weapon made of synthetic skunk liquid which smells like raw sewage & is impossible to wash off.

At the weekly protest in December 2011, 28-year-old Mustafa Tamimi (nephew of Bashir), died after an Israeli soldier shot him directly in the face with a tear gas canister. When other protestors reacted with horror, the Israeli soldiers laughed & taunted, “So?” In 2012, 31-year-old Rushdi Tamimi, was killed with live fire from Israeli soldiers.

Bassem Tamimi, a leader of the protests, has been arrested several times by Israeli soldiers & was once confined to administrative detention without trial. In 2012, he was found guilty in an Israeli military court of inciting youth to throw stones & holding a march without a permit. His entire family, particularly his teenage daughter, Ahed, are well-known protesters against the settlement expansion.

In August 2015, there was an incident where an Israeli soldier slammed 12-year-old Abu Yazan Tamimi (whose arm was in a cast) to the ground for throwing stones during the protest. The photo of that went viral when four Tamimi women–two mothers (Nariman & Nawal) & two teenagers (Ahed & her cousin Nour) rushed the soldier & tried to get him off the boy. Ahed is seen biting the soldier after he hit her in the face. Bassem is also seen in the photo rushing the soldier.

Boycott all Israeli products (barcode beginning 729) in solidarity with Palestinians opposing the expropriation of their ancestral lands.