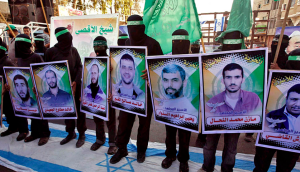 This photo is one of three recent photos in the LA Times that does not portray Palestinians as nihilistic, violent youth. It certainly doesn’t represent an editorial change but it is unusual to see Palestinian political concerns reflected in US media.

These Palestinians–masked probably to protect themselves from identification by Israeli security forces–are standing on an Israeli flag holding up photos of some of the 7,500 Palestinian political prisoners, including children, in the Israeli gulag. Protesters were demanding their release.

The caption couldn’t leave well enough alone & noted that the protest was organized by “the Islamist movement Hamas.” If they’re doing the right thing, why care who the hell organized it!?