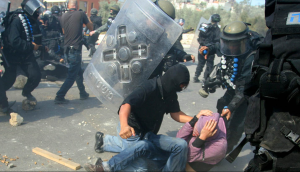 This is the third photo that appeared in the LA Times last week portraying some reality about the relationship between Israel & Palestinians. Once again, the whole story is not reported but the fact that it was published is quite surprising, if not remarkable.

These are Israeli riot & undercover police assaulting an “Arab-Israeli” (a Palestinian citizen of Israel) in the north Israel town of Umm al-Fahm. The caption says that extreme rightwing Israelis were marching under heavy police escort through the town & “were met by scores of stone-throwing residents.”

A little elaboration would have been useful. The “extreme rightwing Israelis” were members of Otzma Yehudit, a far right political party that regularly holds marches in predominantly Palestinian towns within Israel, including Nazareth, Rahat, Musmus, Ara, Arara, & Umm al-Fahm. The latter has a majority population of over 52,000 Palestinians. Despite the arrant provocations of such protests & even warnings of violence by the Israeli police, the Supreme Court ruled last January to allow these marches as freedom of expression. They are freedom of expression for racists but unfortunately the ones who get beaten are Palestinian counter-protesters.

This is the third time Otzma Yehudit marched in Umm al-Fahm. The first time was in 2009; the second in October 2010 where they marched to demand the Islamic Movement (IM) be outlawed & against the participation of Sheikh Raed Salah, an outspoken IM leader, in the May 2010 Gaza Freedom Flotilla that was attacked by Israeli commandoes. Nine activists were killed & dozens injured. The extreme rightwing & of course the Israeli government have an entire brief against Salah, not just for his involvement in the flotilla but for his opposition & activism.

The 2010 protest was quite violent against Palestinians with tear gas, & stun grenade attacks, mounted police assaults, assaults just like this one last week, & arrests.

Build BDS in solidarity with Palestinians who have a right to live without provocations, dispossession, occupation, apartheid, carpet bombing. Don’t buy a damn thing with barcode beginning 729 & check every product from cosmetics to shoes to foods.