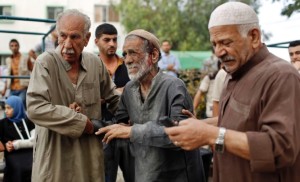 The world bears witness to ethnic cleansing in Gaza: medics & doctors break down weeping while treating mangled victims of Israeli bombers or preparing them for burial; thousands stand shell-shocked in the rubble of their homes; thousands roused by night bombing run in the streets from the next airstrike with nowhere to run for cover, no way to escape; terrified children wail while adults are too terrified to cry.

For Israel, it’s like shooting fish in a barrel, a sport which requires the most jaded racist hatred to carry out. When Zionist apologist & NY Times bureau chief in Jerusalem, Jodi Rudoren claimed Palestinians had a “ho-hum” indifference to death & devastation, was she describing shell-shock or just exposing her own jaundice to Palestinian suffering?

The nature of ethnic cleansing is indiscrimination: take ’em all out–man, woman, & child; old, young, infirm, & disabled. And that is exactly what Israel is doing while politicians & government officials around the world hit the talk shows to run interference for Israeli lies & talk their way around their own involvement. It’s hard to measure who’s more despicable among them: Obama, Clinton, Kerry, Harper, Cameron. But of course, they’ve honed their skills at lying to explain the several US-NATO wars. They slough off the suggestion of ethnic cleansing by changing the topic to Hamas rockets. And still the world awaits evidence of rocket damage in Israel. Hundreds have been bombed to death in Gaza (so far 508), thousands have been gruesomely injured, but Israel reports one death of a guy working with the military in a war zone. No civilians. But such telling discrepancy doesn’t give our war criminals pause in spewing horse manure in place of truth.

If the truth will out, it is from the international movement forming ranks demanding “stop the massacre in Gaza, stop the genocide!” Tens of thousands rallied around the world this week-end, thousands more are organizing. Intifada is the Palestinian resistance movement against Israeli apartheid. While they are struggling for survival against Israeli bombs, the international solidarity movement must take their place & fight in their stead.

The question has been raised by thoughtful activists: why has the Palestinian struggle for justice evoked such a resounding international response when the antiwar movement opposed to US-NATO wars in Afghanistan, Iraq & elsewhere remains so weak, when the response to US involvement in Syria has been non-existent? Some publications have chided this response–not to build opposition to US military interference but to demean the importance of the Palestinian struggle. The Nation magazine, to cover for its equivocations on Palestine & Israeli apartheid, published an article by some old reprobate impugning the motives of solidarity activists because they are not Jewish or Arab & have no vested interest in the outcome of the conflict.

What the old reprobate doesn’t understand is that men & women of good will do have a vested interest in the fight against apartheid & ethnic cleansing. The concept of solidarity has taken quite a beating in the past decade by those who’ve never gotten off their asses to exercise it. But human solidarity is the most transformative power on the face of the earth & the only power that can solve the conflict between Israeli apartheid & Palestinian justice & make this world suitable for human beings to live & love in.

This wounded man in Gaza is reacting to the death of family members killed by Israeli bombs in the Shujaiyah district. Judge for yourself just how “ho-hum” he’s feeling.