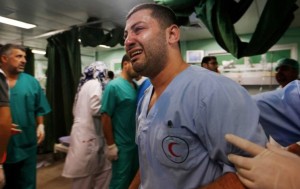 Those who live in countries practiced in the treacheries of militarism & colonialism become tutored in the treacheries of dehumanizing propaganda. Westmoreland, one of the military generals & an insuperable ass who headed up the US war in Vietnam notoriously said, the “Oriental doesn’t put the same high price on life as does a Westerner”. It was the Civil Rights Movement of that same era that exposed that crap for the horse manure it is.

They still use it though–now againsts Arabs. They’ve been drawing on the poisoned rancid well of racism since the foundations of colonialism until now it’s become essential to manage the barbaric phase of capitalism.

Nowhere is it more rancidly employed than against Palestinians. When Israelis gather on hilltops to cheer on genocide, we see the fathoms of hatred propping up this decaying system. Colonialism isn’t riding high when it resorts to such extremes of violence; it is erupting in desperation because it’s foundation is toppling. It has not been able to break Palestinian intifada in 66 years of the most unspeakable crimes & as vulnerable as Gaza is now before the onslaught, the truth is now more widely known & more vigorously opposed.

Jodi Rudoren, The NY Times Jerusalem bureau chief, publicly commented (in 2012): ” while death & destruction is far more severe in Gaza than in Israel, it seems like Israelis are almost more traumatized. The Gazans have a deep culture of resistance & aspiration to martyrdom, they’re used to it from Cast Lead & other conflicts, & they have such limited lives that in many ways they have less to lose…. I’ve been surprised that when I talk to people who just lost a relative, or who are gathering belongings from a bombed-out house, they seem a bit ho-hum.” Did you ever read such a load of crap? That’s not the keen eye of war reportage; it’s racist tripe, colonial vision, & the foulest propaganda.

Does this man’s grief look “a bit ho-hum” to you? This Palestinian medic treats people injured by Israeli bombs at the Kamal Adwan hospital in Beit Lahiya, a town in northern Gaza near the Israeli border & only a few miles from Sderot, where Israelis sit in lawn chairs to entertain themselves with ethnic cleansing. If vision is not incapacitated by vile racist hatred, who is traumatized & who is not is made evident by that contrast.

For nearly two weeks now, Palestinians weep openly over the deaths & mangled bodies of their children & beloved. Palestinian supporters witnessing this slaughter are bereft & grieving. But intifada is not destroyed. Thousands of men & women around the world who stand with justice & want to take a public stand against the unspeakable criminality must take up the banner of Palestinian intifada while our Gazan brothers & sisters fight to dodge bombs & survive.

Protests of solidarity & to oppose Israeli genocide continue around the world & must continue on a campaign footing demanding “Stop the massacre in Gaza!” Those near Washington DC should make every attempt to join the national march today to the White House exposing US complicity & bankrolling of genocide & demanding they cease all military aid to Israel. All out!