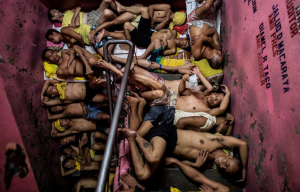 This is the notorious Quezon City Jail in Metro Manila, built to house 800 prisoners but now housing 3,800 to accommodate the thousands of drug users turning themselves in for asylum in jail rather than be hunted down & murdered on the street by vigilantes.

Noel Celis, the photographer, took a series of photos at the prison in 2016 to bring attention to prison conditions in the Philippines which he said brought to mind images of Dante’s Inferno. There have to be significant mental & physical health problems, including infectious diseases, from living in this kind of squalor & inhumanity.

Many of the prisoners at Quezon City Jail are awaiting trial so these are the conditions of those accused of crime, not those convicted of anything & who are anyway mostly guilty of being impoverished by neoliberal scorched earth economics.