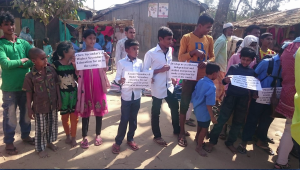 For the same reasons public education has long been under attack in the US, it is under attack for working people & oppressed nationalities everywhere. Eliminating free, universal public education is at the heart of neoliberal economics & is the cause of social struggles in several countries

In the US, it was emancipated Blacks in the Reconstruction Era South who introduced free, universal public education in the US because no one better understood & respected the power of education.

This is a protest rally last Thursday in a Rohingya refugee camp in Bangladesh demanding secondary & higher education for refugees. Under the UN’s 1951 Refugee Convention states are obligated to provide education beyond elementary level. But Bangladesh is not a signatory to that agreement & does not permit secondary schools in the camps. Like Indian reservations in the US before the civil rights movement in the 1960s, Rohingya refugees are officially barred from leaving the camps so formalized education for refugees ends around the age of 12. The entire world of learning is denied them & any possibility for employment above sweatshops.

Given the high level of child labor in Bangladesh, even elementary education for citizens is also a problematic.

Enough of that stuff! Full access to education all the way through college for Rohingya refugees.

(Photo from Mohammed Imran, elected refugee representative at the camp.)