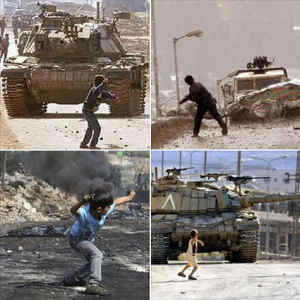 The top left photo is 14-year-old Faris Odeh facing off against an Israeli tank just outside Gaza city in October, 2000. The image became an iconic metaphor for Palestinians standing unarmed against one of the most high-tech militaries in the world. Ten days later (on Nov 8th), young Odeh was shot dead by Israeli soldiers in another stone throwing incident.

The top right photo is a small Kashmiri boy facing off with stones against an Indian army tank in 2009 after Indian paramilitary forces were shooting at unarmed protesters in the town of Baramulla & had just shot dead another young boy.

After the image of Faris Odeh exposed the brutality of military occupation, Israeli propagandists tried to demonize young Odeh (& other Palestinian stone-throwers) as a thrill-seeker, daredevil, even a delinquent & criminal in formation. That is not just a contemptuous attitude toward the emotional & intellectual lives of children & their ardent rebellion against oppression but a sleazy attempt to whitewash the criminality of occupation & its profound affects on small children.

In fact, the terrorizing & abuse of Palestinian children under Israeli occupation is systematic, institutionalized, & integral to military control. There is no security for children who see entire villages evicted & homes bulldozed to make room for Israeli settlements; who witness Israeli settlers torching Palestinian homes & burning people to death with impunity; who witness home invasions, with parents dragged from their beds in the middle of the night, humiliated, arrested; or see other children blindfolded, shackled, & abducted.

In protests to prevent bulldozers & wheel loaders from razing homes, Palestinian children sustain injuries from tear gas & rubber bullets. Over 700 are arrested every year & placed in Israeli military prisons under administrative detention (which means indefinitely & without due process) where they are interrogated without parent or counsel present & subjected to torture.

From January 1st to December 5th, 2016, 26 Palestinian children were killed by occupying forces & 459 children were abducted, including during home invasions by soldiers. Israel stood condemned by human rights groups for directly targeting children with bombers in the 2014 carpet bombing siege of Gaza.

Children’s participation in Palestinian & Kashmiri Intifada is not thrill-seeking or criminal behavior but political resistance to oppression & occupation. They are held in the highest esteem who put their lives on the line for freedom–whether they be 7 or 17 or 70.

End the occupation. Build & honor BDS to support the Palestinian struggle for self-determination.