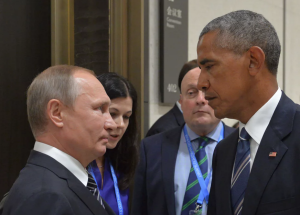 High melodrama at the G20 (Gang of 20) meeting in Hangzhou, China. This is Putin & Obama at G20 putting on their mad faces for dramatic affect. We know the look so well from all the times Obama does his mad face routine with Netanyahu. But the pipeline of military aid to Israel keeps rolling no matter how many evil eyes Obama gives.

In July, the US proposed military collaboration with Russia in Syria against one of the paramilitary forces, the al-Qaeda-linked al-Nusra group. That would effectively & openly put the US & Russia both on the side of Assad & buttress his dictatorship. Reality has a way of making fools of those who apply formulae & don’t systematically evaluate what the hell is going on. Behind the evil eye between Putin & Obama there are political footsies.

Capitalism is a competitive system spiraling into crises & G20 is a desperate measure, a way of feigning collaboration to save the system. File that under snow balls chance in hell.