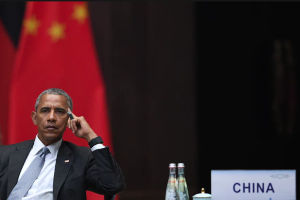 More high drama at the G20 meeting in China: Chinese leaders have been accused of a calculated diplomatic snub to Obama by not providing him with landing stairs for his plane & a red carpet even though they provided them to other criminal dignitaries, including Modi, Putin, Temer, & May.

Obama had the indignity of using a little-used exit in the belly of Air Force One with no rolling staircase & red carpet. Who knew there was such protocol in getting off a damn airplane? But US & Chinese officials nearly came to fisticuffs over the issue.

And the snub continues. Here our man Obama is sitting pouting & still neglected by Chinese officials. Have they seated him alone at a state banquet? Or are they just questioning his visa?

This is no way for a commander-in-chief with 1,000 US military bases all over the world & nuclear warheads directed at China to be treated. Color the American citizenry outraged. Once we get over rolling on the floor laughing.