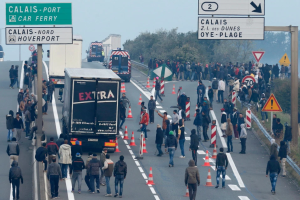 Today truckers unions with lorries & tractors, local farmers, shop keepers, harbor workers, police, & the mayor of Calais, France began blockading roads leading to the entrance to the Channel crossing. They’re demanding France dismantle the squalid camp of 10,000 refugees mostly from African countries camped there for access to the crossing to England. The truckers, et al, are calling on the townspeople of Calais to join them.

Lorry unions organizing the blockades claim drivers are being attacked by refugees, that ‘rioting” refugees are setting fire to lorries, that gangs of armed traffickers & refugees are forcing lorries to stop so refugees can break in. Farmers claim they’re doing damage to their fields–whether by stealing produce, setting up tents, or taking a whiz & a poop isn’t specified.

Those removed from interaction with working class people & who may even suspect most of them of low intellect will try to do an intersectional alibi here for the vicious racism & xenophobia involved. There will be heart-wrenching explanations of economic stress among working people forcing them to buy into divide & conquer crap against refugees & immigrants. Cry me a river!

People don’t have to agree with a word Marx says but that “workers of the world unite” stuff is practical politics, not high-flown melodrama.The jamokes gathered at these blockades are among the best paid workers in the entire class, not the downtrodden unemployed or under-employed earning minimum wage, under-the-table spare change or scrounging for tips at dangerous jobs. The truckers think they’re better than those African refugees & are letting governments play them for chumps in the divide & conquer game.

Intersectional pity for the truckers, my ass! They should be condemned & massively counter-protested as not speaking for working people but only for white nationalists & other rightwing boneheads. They have as much access to information as everybody else & if they choose to side with racism & nationalism against refugee rights then tough noogies for their idiocies. They will have to be politically opposed & defeated.

All they have to do in solidarity is allow refugees to board their lorries to cross the channel & stand with human rights activists demanding that “Immigration is a human right. Open the damn borders.”

(Photo of blockade from Reuters)