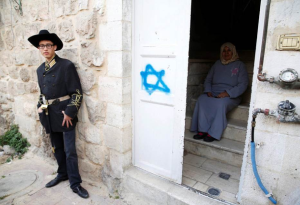 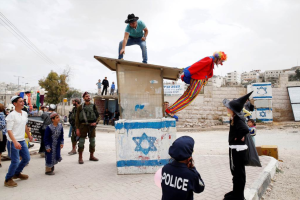 Jews celebrated the festival of Purim yesterday. It’s a carnival-like, annual celebration of a story from Hebrew scripture where Jews of the Persian empire thwarted a plot to massacre them 2,500 years ago. Costumes, masks, parades accompany the more somber aspects of the ritual. Except in Hebron in the occupied West Bank, where Zionist settlers & right-wing provocateurs from Israel converge to booze it up & intimidate Palestinians. The reveler-provocateurs are fully protected by a beefed up deployment of Israeli soldiers.

During Purim 2016 in Hebron, Zionist settlers used loudspeakers at the Ibrahimi Mosque to sing racist songs calling for the expulsion of Palestinians from Hebron. There are 250,000 Palestinian residents in Hebron & less than 1,000 Israeli settlers. The mosque is an ancient religious site for Palestinians which Israelis are violently trying to reclaim as part of their phony biblical claim to Palestine, just as they do with the Aqsa Mosque in Jerusalem.

It was during Purim 2016 in Hebron that Israeli soldiers encountered two Palestinians: 21-year-old Ramzi Qasrawi & 21-year-old Abd Elfatah Ashareef. They shot & killed Ramzi & wounded Abd. The offense? Walking while Palestinian. Whilst Abd was lying motionless on the ground, Israeli soldier Elor Azaria walked up & shot him in the head. An Israeli military court just let Azaria walk for extrajudicial execution with a sentence of 18 months for manslaughter.

That ruling came down two weeks ago, just before Purim 2017, giving the right-wing plenty of time to organize this years provocation in Hebron. Authorities should have locked out the buses carrying right-wingers from Israel looking for trouble–even if they came dressed in clown suits. Instead, they allowed them to come, including Itamar Ben-Gvir, an extremist activist who came dressed as Elor Azaria. Loudspeakers at the parade praised Azaria as a national hero.

These photos from Purim 2017 in Hebron are worth a thousand lies. Palestinians must have been terrified for their children & for themselves. The most effective way to render solidarity against this aggression is to demand no US aid of any kind to Israel & to honor the boycott of Israeli products by buying nothing with a barcode beginning 729 & by encouraging others to do the same.

(Both photos by Baz Ratner/Reuters)