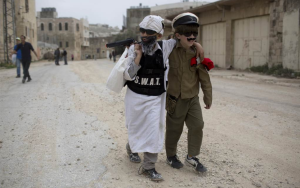 Israeli kids in a Purim 2017 parade–one dressed as Elor Azaria, the IDF soldier who executed a wounded Palestinian at Purim 2016 in Hebron in the occupied West Bank.

The intent of such costumes is to indoctrinate children with racism, colonial supremacy, nationalism. An analog is the cowboy & Indian costumes & movies in the US, pre-civil rights movement. Children in Israel were encouraged to attend Purim celebrations dressed as Elor Azaria. There was a costume competition for the kid with the best likeness & a man offered to make 300 Azaria masks to hand out as prizes.

It is a very different thing for Kashmiri children to play armed militant against an occupying army because it expresses fear & a commitment to defending themselves against terrorism–though not the wisest way to do so. Israeli children are being inculcated with militarism, not self-defense; with racist aggression against unarmed Palestinians.

This will fully take its revenge on Israeli society which will turn children into hateful psychopathic killers looking for honor in extrajudicial execution of Palestinians. It’s unlikely a permanent military fortress was the vision & aspiration of Zionism in its origins but when it cast its fate with racism & colonialism hoping to strike a better bargain for persecuted Jews, this was the inevitable result.

The hope for Jews to end the hatred & persecution against them is to stand against racism & colonial supremacy which is why Jewish activists have always played prominent roles in the struggle against apartheid, colonialism & against Zionism.

The vision of a democratic secular state where Palestinians & Jews can live in harmony as brothers & sisters is the alternative to this militarized dystopia. Honor the economic boycott of Israel by buying nothing with barcode beginning 729 to advance that vision before Zionism has twisted any more generations of children.