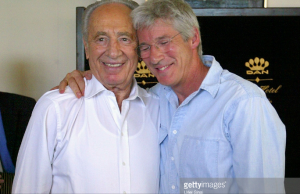 Just so we’re clear where the American gigolo stands on the issue of human rights & apartheid:

This is the obligatory photo op with Shimon Peres all committed Zionists do in homage to Israel. This trip in 2004 is one of numerous trips Gere has made to Israel. He’s probably been courted by Zionist organizations to render a human rights face to ethnic cleansing. The caption said the gigolo was “in Israel on a good will visit, visiting both Israelis & Palestinians.” It isn’t reported which Palestinians but if he actually did meet with any, it was probably a less than cordial encounter.

One could say that perhaps our man the gigolo has learned a thing or two since 2004 & that’s why he made his objection to the settlements & occupation. Once could also say that as a human rights advocate he isn’t much on top of things since there is no evidence that he ever spoke out against the several carpet bombing offensives over Gaza.

It’s nice he spoke out against the settlements. So does the US State Department which funds them. The Zionist media is all over Gere for his statement but they never did get the art of equivocation in politics. If you’re going to give a human rights face to apartheid you have to learn to talk out of both sides of your ass. And the gigolo is the master of that.

Honor the cultural & economic boycott of Israel: buy nothing with barcode beginning 729.