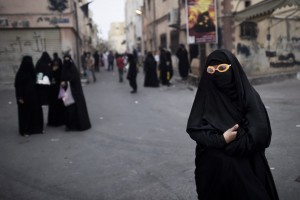 We should take a moment to honor the democracy protesters in Bahrain, especially the women who play a leading role in the Bahraini revolution & put the lie to all the misogynist crap about women wearing veils. If you want to know where their tough kids learned defiance against violent tyranny, take a look at this woman who showed up at yesterday’s protests wearing swimming goggles against tear gas.

Yesterday activists marked the 4th anniversary of the Bahraini revolution with demonstrations. The US Fifth Fleet & a new British naval base are situated in Bahrain to control the Gulf region & are vital in the campaign against ISIL. That means the democracy movement is up against the combined barbarism of the Bahrain regime, the US & UK. As if that weren’t enough, the media plays a pernicious role in fabricating a story about the democracy movement that turns it into a sectarian conflict between two denominations of Islam. And that deception includes Al-Jazeera & The Huntington Post. Anyone who has followed the Bahraini movement knows that narrative is designed to discredit the struggle against tyranny in Bahrain. Religious differences have played no role in the political movement.

All media have been proclaiming the uprising defeated & deader than a doornail, with headlines like “Bahrain Protesters Rally On Anniversary Of Crushed Uprising” & “Uprising crushed.” One wonders where the media gets their news. You can’t really believe estimates of the size of the protests since it’s established media practice to underestimate the size of progressive actions & inflate the size of right-wing events. But it seems likely the protests were smaller than usual, not because the fervor for social change has been crushed but because the regime threatened that even calls for protests would be treated like a crime & activists prosecuted for ‘spreading terror’. For the past several months, they’ve been stripping activists of their citizenship & throwing them into the gulag. And still protests continued.

Thousands of riot cops were deployed to thwart anniversary protests; they set up checkpoints & went nuts with the tear gas to prevent protesters from gathering. Hundreds were arrested, hundreds seriously injured by police assaults. One activist reported he saw hundreds of armed people in civilian clothes attacking protesters. Many protesters were shot but could not be taken to hospitals because they would likely be arrested, as happened in the 2011 uprising. Medical staff treating them then were prosecuted & incarcerated.

After all that, Al Jazeera had the chutzpah to repeat the Associated Press claim that protesters were violent, using rocks & petrol bombs to block roads & defy riot cops. They must be taking their cues from media coverage of the Palestinian struggle against Israeli occupation & ethnic cleansing.

The Guardian-UK caption to this photo referred to clashes with police over the right to assemble as “riots.” Would that the rest of suffering humanity had mothers who taught their kids how to “riot.”
Our fullest respect & solidarity with the Bahraini revolution. We regret the movement in the US is too weak to restrain the Pentagon. Your intransigence will help to change that.