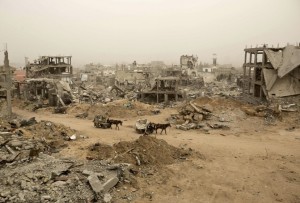 This is the Shejaiya neighborhood in Gaza City, a residential area bombed to smithereens by Israel last summer. The photo was taken in a recent sandstorm. The bombing buried many alive & has left thousands homeless in winter. This is what’s called a war crime, even though the UN needs a special commission to determine what our eyes can see.

The Guardian-UK caption to this photo read: “The buildings were destroyed during last year’s 50-day war between Israel & Hamas-led militants.” Sometimes the media lies about Palestine simply take your breath away.