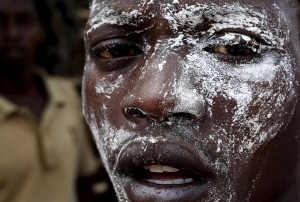 This is a Burundi protester against the regime of president Pierre Nkurunziza who is attempting to run for a third term of office in the election this month. The dispute is likely less over the illegalities of his campaign so much as what his tenure in office represents. One could be confused & think the protester just got off work at the cassava mill & didn’t have time to wash up but the state of democracy is so volatile in Burundi that protesters show up in disguise, including under foliage headdress, to avoid identification by the regime police.

Burundi has been in a state of acute social crisis since the country became independent in 1962, including a 12-year civil war that ended in 2005–not because the people are belligerent & can’t get along but because colonialism left a hell of a mess & aggravated class divisions. They were still reeling from that misery when neoliberalism moved in to implement the updated form of colonialism.

Nkurunziza is a guy who plays ball with the IMF & they want to see him re-installed. Which is probably why they gave him a nearly $7 million loan in April & have promised $14 million more next year. They’re given Burundi nearly $42 million over the past three years. The country, considered one of the poorest in the world, appears to be living on the dole, with nearly half of the 2015 national budget of $966 million (1.5 trillion franc) funded by “international donors.” Whoever the hell they are, we can be certain they aren’t doing it in a spirit of largesse but to facilitate plunder.

The IMF reports their “economic reform program” for the country is moving a little slow but all-in-all the outlook for plunder is positive: coffee plantations are exporting; infrastructure projects including fiber optics, hydropower, & roads to serve the plantations are proceeding; healthcare & education are in a shambles. Eighty-percent of 10 million Burundians live below the poverty line & the country has the miserable distinction of being the hungriest in the world. Things couldn’t be better from the IMF point of view.

Protests against Nkurunziza’s regime have been going on for weeks. Media reports about 20 protesters have been killed. This is almost certainly an underestimate & doesn’t include the number of those injured & arrested. They are also reporting 90,000 people have fled to neighboring countries, including many leaders of the protests.

Rebellion against neoliberalism, the barbaric phase of capitalism, may take on what seem inchoate political forms. But to paraphrase Black prisoners from the 1971 Attica prison rebellion in New York, ’tis but the sound before the fury of those who are oppressed.’