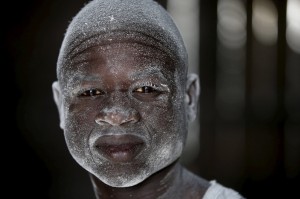 This extraordinary photo is a young man working in a cassava processing plant in the town of Bujumbura, Burundi in central Africa. Media coverage (what there is of it) of civil conflict there focus on disputes over undemocratic elections. You don’t have to investigate the history but only view this image to know the causes of massive protests go much deeper than which politicians are administrating tyranny.

Cassava was a staple food for pre-Columbian peoples in the Americas, particularly the region now Brazil. It was taken to Africa along with maize culture by Portuguese traders in the 16th century. Under the whip of neoliberal agribusiness, called the Green Revolution, African farming is now switching from maize growing to cassava production. Nearly half is intended for industrial use, including animal feed, glue, bio-fuel, & glucose syrup; the other half is used as a food staple in several African countries. This may be one of the worst cases of “let them eat cake” that human history has ever seen because it’s unlikely Bill & Melinda Gates, whose foundation is promoting cassava production in Africa, consider cassava edible in any form. After all they’re not livestock but the elite.

Ostensibly cassava production is being promoted because it’s a hearty plant that will grow almost anywhere–which doesn’t particularly speak to its nutritional value. The chief problem is its high toxicity in cyanide. In food preparation, people use several different detoxification processes including drying, boiling, fermenting, & elaborate cooking methods. Because if they don’t, they’re subject to any number of catastrophic health problems; acute cyanide poisoning can bring death within hours. Among the health consequences are endemic goiter; neurological disorders, including spasms & loss of control over bodily movements; cognitive disability; & in pregnant women, toxicity can cross the placental barrier & affect the fetus. All of these health problems are showing up among people in African countries where cassava has become a staple food & at a time when neoliberalism in agriculture is accompanied by neoliberalism in health care–the kind of health care systems that facilitate such things as the Ebola epidemic.

This is much worse than a case of “let them eat cake.” This is unspeakable, cynical, treacherous. The people of these countries understand what cassava is doing to them & their children but, given the state of neoliberal isolationism, they often have no alternative for survival. In one instance of drought in Mozambique, all food crops were lost except the most toxic variety of cassava. Due to urgency, processing was curtailed & there was insufficient detoxification. Many died within a few hours with symptoms of nausea, vertigo, & confusion.

So if cassava has to be processed before it is non-toxic, why is this worker in a cassava mill not wearing protective gear? He’s sucking it into his lungs, swallowing it in his saliva & the Gates Foundation didn’t consider safety protection for these young workers an essential part of cassava production? The mind reels before neoliberal barbarism.

The neoliberal agencies promoting this misery are rooted in the US & Europe & the greatest solidarity we can render to our brothers & sisters is to rout them out, not just from Africa, but out of the US & Europe. They’re entirely incompatible with human life.