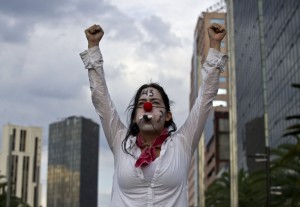 Although the Mexican regime of President Peña Nieto has been trying to close the case of the 43 Ayotzinapa disappeared student teachers, protesters continue regular demonstrations all over Mexico demanding the students be returned alive. This young woman is at a protest yesterday in Mexico City marking six months since the students were abducted by soldiers in the 27th Infantry Battalion of the Mexican Army. The soldiers took them from a hospital where they sought treatment for their injuries in the bus attack.

Parents & family members of the students are presently on an educational & solidarity tour throughout the US making the case of abduction by the army at the behest of the regime. They think for good reason their sons are being kept in a clandestine prison & they want them returned safely.

The attached schedule shows where the families will be speaking & holding rallies at Mexican consulates in the US & a place where people can donate to building the tour.