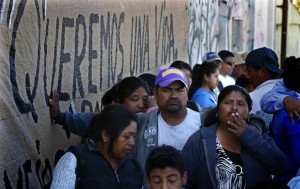 More than 50,000 farmworkers across Mexico’s Baja California peninsula (about 200 miles south of San Diego) have been on strike for over a week against low pay, harsh working conditions including unpaid overtime, & labor abuses including sexual abuse. Millions of dollars of produce, mostly tomatoes & strawberries slated for export to US supermarkets, are rotting in the fields.

Strikers are demanding health benefits, overtime pay, days off, water, work breaks, an end to arbitrary firings & abuse by field bosses & for wages to be raised from US $8 to $10 a day to about $20. They’d have to raise the wages to at least $100 a day to get out of the realm of the outrageous.

According to reports, the area lacks access to water, sanitation, power, healthcare, schools, adequate housing. Many farmworkers are from indigenous communities & speak limited Spanish so agribusiness companies must have thought they were ideal victims for exploitation. The situation must be bad since not long ago agribusiness firms were accused of holding farmworkers in slave conditions. And Mexico’s Human Rights Commission is not only investigating allegations of abuse but had to rescue 200 workers from a farm where they were abused & required medical care.

The agribusiness industry saw this strike coming because about a month ago they began promising reforms & compliance with labor law. Farmworkers recognized the promises as a stunt & went out on strike. They’re blocking major highways & stopping 18-wheelers carrying produce north, bringing them into conflict with police & military who are probably in the state to facilitate drug trafficking to the US. More than 200 strikers have been arrested “after protests devolved into riots, rock-throwing, & vandalism” according to the Los Angeles Times. Hasn’t the LA Times ever seen a strike before? What do they think happens when you send in the army to prevent strikers from obstructing scabs trying to break a strike?

Today the big talkers of the agribusiness coalition offered a 6 percent wage increase which farmworkers called a slap in the face. That’s about 55 cents max per day. One should keep in mind that strawberries in a US supermarket just across the border cost at least $4 or $5 a pint. One hopes in response to such an outrageous insult the strikers do a lot more “rioting, rock-throwing, & vandalism” until those vile produce companies are brought to their knees.

In this photo strikers in Vicente Guerrero, Baja anxiously awaited news from the negotiations today because when you make $10 a day, you’re hurting without several days of pay. Strikes take quite a toll. That’s when the companies offered them the chump change of 55 cents.

The graffiti on the wall reads, “We want a life.” To get that they may need a revolution.

Our fullest solidarity with their strike. And our deepest respect for their willingness to take on the neoliberal vultures.