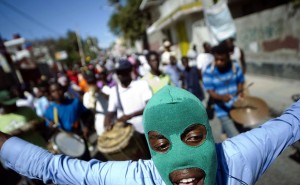 Some peoples deserve a special place in history because of their refusal to be broken even when it looks like they don’t have a snowball’s chance in hell. Their political spirit is something to behold. Those peoples would certainly include Palestinians & Haitians–though many others come to mind. Protests in Haiti have been going on for three months to bring down the corrupt, venal regime of Michel Martelly who has been ruling by decree since January after parliament was dissolved.

Sweet Micky, as he used to be known, was a pop singer who often performed in diapers & ran a nightclub patronized by army officers & members of Haiti’s ruling elite. He wasn’t just another party animal though; in his youth he was a member of the Tonton Macoutes, a death squad under dictator “Baby Doc” Duvalier who was responsible for the death & torture of thousands of Haitians & who made his money in trafficking drugs & body parts from dead Haitians–thereby turning his monstrous crimes into a profitable enterprise.

Micky was closely identified with the 1991 military coup that ousted democratically elected president Jean-Bertrand Aristide & he socialized with members of FRAPH, a paramilitary death squad orchestrated by the CIA against the Aristide regime & who engaged in gang rapes & murder.

The Obama regime spent nearly $15 million to get Micky elected in 2010 & he received another $6 million from an anonymous donor in Florida–& still it required massive election fraud to get him elected. But where there’s a will, there’s palms to grease or threats to make. Hillary Clinton herself flew to Haiti to ensure Martelly came out top dog in all the wrangling over fraud. Martelly refuses to say who funded his campaign since he may need US special forces to evacuate him some day.

To show their commitment to popular democracy, the UN occupying army in Haiti & US State Department ignore the massive protests & continue to stand by Micky. He’s probably worth a few laughs, does everything they tell him, & doesn’t squawk about that cholera epidemic.

Haitians are also continuing protests against fuel increases. More than six million Haitians (about 60% of the population) live on less than two dollars a day, according to the World Bank, but petrol is $4.25 a gallon. You’d have to work half the week to buy one lousy gallon. Micky’s regime lets the US plunder & then tries to solve the problems created on the backs of working people.

Last month when bus drivers went on a 2-day strike, media was filled with concern about the resentment felt by Haitians. Many Haitians are too poor to own their own autos so workers & school children were stranded without public transportation. It’s just so curious that in concern for passengers getting to work & school media never mentioned that fuel prices affect the cost of housing; lower fuel prices are to everyone’s advantage so those stranded passengers might not be as put out as media claims. That’s why along with bouncing Micky out on his ear Haitians are demonstrating to get the fuel prices cut in half.

After the 2010 earthquake, price gouging on necessary items, including gasoline, water, food, was through the roof–in the midst of devastation. There wasn’t a fuel shortage in Port-au-Prince but prices tripled from pre-earthquake levels. When media cries crocodile tears over the inconvenience suffered by Haitians, they aren’t thinking about the same Haitians as the rest of us.