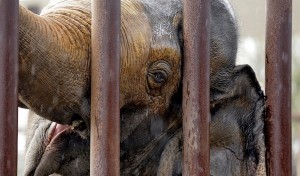 It isn’t necessary to utter a word of condemnation against the treatment of elephants in the circus. One only need post this photo of a languishing elephant in his pen at the sarcastically named Ringling Bros. & Barnum & Bailey Center for Elephant Conservation in Polk City, Florida. The circus says it will phase out its elephant acts by 2018. What’s wrong with today?

Comparing the loving treatment of orphaned & rescued elephants in animal rescue reserves in places like Kenya & even Kentucky to this monstrosity of so-called conservation highlights the immense crimes committed against these magnificent animals in the name of entertainment.

Close down the zoos! Shut down the circuses until they release the animals to shelter!