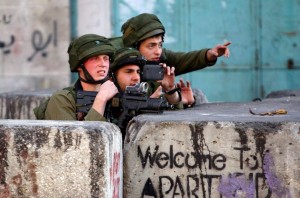 These Israeli soldiers are in the West Bank city of Hebron taking photos “during clashes with Palestinian stone-throwers.” If you didn’t know the score & just relied on media, you’d think Palestinians frequently erupted into bouts of senseless stone-throwing & the Israeli military had to occupy these uncivilized barbarians & beat them back with tear gas & high-powered rifles.

Could it be the Palestinians they’re taking surveillance photos of (they certainly aren’t taking selfies) are again protesting the occupation of Hebron; the closure of Shuhada Street, an important market center closed to all Palestinian pedestrian & vehicular access since 2000; the attempts to claim the city as a historic holy site in Judaism based on Zionist fairy tales?

There are 250,000 Palestinian residents with historic & familial roots in Hebron & somewhere between 500 & 850 Zionist settlers from all over Kingdom Come speaking different languages. And still Israel’s godless leaders claim Jewish history in Hebron goes back to the Old Testament written somewhere around the 2nd century BCE. You have to have rocks in your head to make such a claim. And even bigger rocks to believe them.

Israeli president Reuven Rivlin visited Hebron last month for a ceremony at the “Hebron Heritage Museum” trying to establish that Biblical claim as something other than nonsense. If the claim has even a shred of validity, Americans of Irish ancestry can lay claim to the Rhineland from whence our ancestors came.

The museum is also to commemorate Jews massacred in Hebron in 1929. Zionists completely misrepresent that horrific event to make Palestinians seem like savages when it was a result of Zionist colonization that intentionally fomented conflict between Jews & Palestinians who long lived in the area in harmony. Descendants of the Hebron Jews who lost family in that violence have publicly repudiated Zionist claims & have described how Jews were sheltered & rescued by Muslim neighbors.

There was a more recent massacre in 1994 when the American settler Baruch Goldstein, a fevered Zionist, murdered 29 Palestinian men & boys praying at the Ibrahimi Mosque, a site which Zionist myth-makers claim is the burial site of Biblical patriarchs. Yeah sure.

Palestinians greeted Rivlin, not with rocks, but with placards saying “Rivlin is not welcome,” “No occupation,” & “Open Shuhada Street.”

And now we know, by Obama’s own admission in a recent press release, that his regime is bankrolling this myth-making apparatus & settler project. He stated forthrightly (something we’re not accustomed to from him) that the US donated $140 million to transport Zionist immigrants to Israel. The money is used for transportation, transitional housing when they arrive, & Hebrew language programs. So all that hand-wringing over Israeli settlements for the credulous media is nothing but show.

Please note the graffiti on the stone: “Welcome to apartheid.”