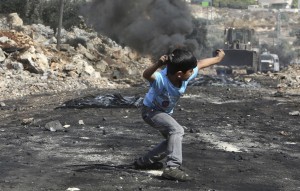 There is a now iconic photo of 15-year-old Faris Odeh, a Palestinian boy from Gaza, standing in front of an Israeli tank hurling a rock. The photo was taken October 29th, 2000. Ten days later (Nov 8th), young Odeh was shot in the neck & killed by Israeli troops for again throwing rocks. He was part of what is called the Al-Aqsa Intifada (or Second Intifada), a period of intensified Palestinian resistance to Israeli occupation & violence which began in September.

Today images of lone Palestinians, including men, women, & children, standing against Israeli tanks & bulldozers are common but have lost none of their power. Hundreds of Palestinian kids are arrested & prosecuted under Israeli military law for rock throwing; hundreds are indicted & serve time in the Israeli gulag. In contrast, very few Zionist settlers are arrested for their constant aggressions against Palestinians.

This young boy is going up against an armored wheel loader used in house demolitions in the West Bank. He’s part of a protest near the Zionist settlement of Qadomem (or Kedumim). Qadomem was settled in 1975 by Gush Emunim, a settlement movement which combined rabid Zionism with religious fanaticism. It was founded by the appropriately named Rabbi Tzvi Kook & existed from the mid-1970s until 1984 under the patronage of the most right-wing political forces in Israel. Their settlement strategy involved frequent terrorist attacks on Palestinians. While Gush Emunim no longer exists as an organization, Qadomem is still run by these political & religious nut cases who hold a deranged commitment to taking over Palestinian lands on the belief God gave it to the Jewish people. The Old Testament may not be bedtime reading, but you’d be hard-pressed to find chapter & verse justifying grand larceny, terrorist attacks, car bombings, vandalism of Palestinian property, physical attacks on Palestinians, burning of mosques & fields, uprooting of olive trees, & ethnic cleansing.

For most of the past 66 years, Palestinians have stood alone against a mighty & relentless military force. Those days are over. Today there are millions of people around the world who know the truth about that Exodus baloney, stand proudly with Palestinians, & form the international phalanx of intifada.