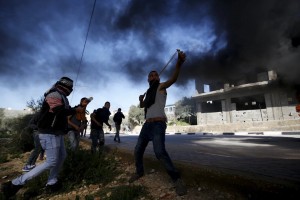 This photo in the Guardian-UK identifies this incident as in Araka, West Bank. It’s the iconic image of Palestinian Intifada we’ve seen a thousand times: youth with slingshots against one of the most sophisticated armies in the world; an army so practiced in the barbarisms of occupation that it is contracted around the world to teach those skills (including, but not exclusively, to Indian commandos occupying Kashmir & US police in the Black community).

The Guardian caption is something of a non sequitur but it can be inferred that these young men are protesting the murder of three Palestinian teenagers by Israeli soldiers several days ago because we are referred to the Guardian’s article about those incidents. Or more accurately, the Guardian’s reproduction of an Associated Press (AP) article from February 14th.

The AP report is typical of reportage about the summary executions of Palestinians by the Israeli army. There’s no evidence AP has reporters in the field; it appears like they sit in the headquarters of the Israeli army & get fed press releases which they issue as news. The only source they ever quote is the Israeli military though they cite the Palestinian health ministry for the names of the young boys.

AP reporting really raises the question of how news reports are generated. Is it like agriculture where five multinational corporations control the world food supply? Is news now just a manufactured commodity? Are reports about reality completely tailored to the needs of the power elite? If it weren’t for social & alternative media, we’d be in a hell of a pickle trying to figure out what’s happening.

What’s remarkable about AP reporting on the Israeli occupation is not that it is biased toward Israel (that’s standard media fare) but that rightwing Zionist journalists who worked for AP accused it of bias toward Palestinians because on occasion they have rejected outright Israeli propaganda submitted by the same reporters which justified the several carpet bombing sieges over Gaza.

In fact, Zionist publications are filled with tiresome accusations of media bias against Israel. They also repeatedly accuse the US government of turning its back on Israel. That’s not how US taxpayers–who hand over billions of dollars a year to arm Israel–see it. It’s not that Zionist ideologues have become completely unhinged from reality but that they are manipulating misinformed public opinion, trying to maintain the beleaguered Exodus mythology & the portrayal of Palestinian resistance to colonialism as terrorism.

The 2016 death rate in the West Bank is now over 180 with dozens of Palestinian teenagers kidnapped by Israeli soldiers. The names of the young boys executed by Israeli soldiers on February 14th are Nihad Waked & Fouad Waked, both 15, & Naim Safi, 17. May they Rest In Peace.

The AP story about their deaths ended with this sentence: “Peace Now, an Israeli watchdog group, said yesterday Israel had begun building 1,800 new settlement homes in the West Bank in 2015.” Any news agency with an ounce of journalistic integrity would get off its ass & send reporters to investigate Israel’s illegal settlements on expropriated Palestinian lands & stop treating the occupying army as a reliable source of information.