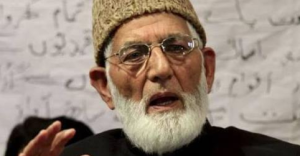 Let’s be frank: many political speeches are tranquilizing & I don’t mean of political unrest. But this speech by Kashmiri leader Syed Ali Geelani (who is in his late 80s) is not one of those. Early on in this current military siege, he was banned from FB but has remained very active on Twitter with invaluable posts about what is going on. People my age want to be like him when we grow up.

Zíæûlhãq Mohammad, who posted this speech, explained that Geelani has been under house arrest since July 8th (the beginning of the siege), is not allowed to speak to media, & his press releases are banned. His son Naseem was denied permission to visit his father yesterday & an older brother Nayeem was arrested today.

Thank you, Zíæûlhãq, for the information.