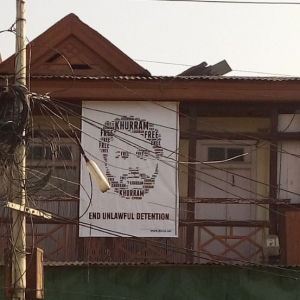 Khurram Parvez has been incarcerated since September 15th. He is a serious, responsible political person who is measured & not the least bit inflammatory in his language. The only reason he’s in jail is to obstruct the human rights investigations & organizing work he headed in Kashmir & his international initiatives over the issue of forcible disappearance.

Defending him is primary because of the experienced role he would be playing now for those thousands being arrested & administratively detained in the current military siege. But there’s another reason. India picked him up for indefinite detention to signal to activists that no one is beyond their reach no matter how internationally renowned.

It’s not a matter of big shot versus little shot but of defending those whose leadership has been fearless & resolute with unquestioned commitment to ending the violent occupation. Children & youth are directly targeted with the sole intention of destroying the struggle for self-determination by terrorizing them into passivity, disabling them in some capacity to weaken resistance (the Indian government is not avant-garde on the toughness of disability rights activists), or silencing them through torture, indefinite detention, disappearance, or death. Picking off an experienced leader is part of that.

We should not feel assured that Khurram is too well-known to be harmed in incarceration. Many leading activists, like Mandela & Mumia Abu Jamal, spend decades in jail; many like Steve Biko, have been murdered in custody. Being dilatory in his defense or defeatist that international pressure can get Khurram released puts him in serious danger along with the thousands of activists recently picked up in home invasions & at street protests.

His defense is how human rights advocates around the world can play an essential role in the struggle against the occupation of Kashmir.

Follow his defense here to get ideas of how to actively support him : https://www.facebook.com/freekhurram/?fref=ts