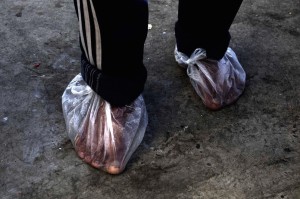 This is a refugee in Greece whose name & nationality are not identified. Let him stand for the 60 million people now on the move all over this planet fleeing from war, bombing, plunder, & sweatshop economics.

All the scriptural exhortations in every holy book & all the high-flown political rhetoric & poetics like “Give me your tired, your poor…” mean nothing to governments whose modus operandi is neoliberalism, the barbaric phase of capitalism.

But to us, to working people, they are ours, they are brothers & sisters. They are fellow human beings & we demand solidarity with them by standing against the wars & plunder driving them & by demanding the borders be opened to all refugees & immigrants & every human hospitality & solidarity be offered them.

The historic imperative remains: rebuild the international antiwar movement–so we can begin to build a world suitable for human beings to live & love in.