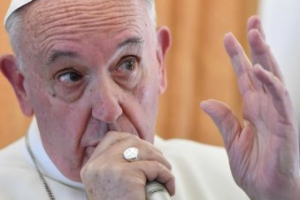 Some people wept & swooned when Pope Francis washed the feet of a couple refugees earlier this year. Pardon me if I don’t get swooning (& haven’t since I first saw it done over Elvis) or if that particular ritual seems a sort of feudal degradation to the recipients deemed lesser so who should feel honored at the great man washing their tootsies.

Will the weeping & swooning be so ardent when they hear he told a reporter the ban on female priests in the Catholic church is forever? I’ve never taken much to priests & think they’d be a lot better off if they could marry. It’s too hard to live without love. Since childhood, I’ve been uncomfortable around them & when I was in the convent outright resented their privileges compared to nuns. It probably wouldn’t go much better if priests were also female.

But what’s operating here is the continuing second-class status of women in the Catholic church. So if I ever have a weak moment of swooning, it won’t be over Pope Francis. Actually, if you ever catch me in a swoon over anyone, you’ll know I’ve lost my marbles.