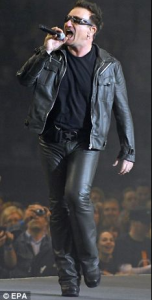 Glamour magazine just named Bono to its annual Women of the Year award. The honorific had more value than the Nobel Peace Prize but after this Bono fiasco, considerably less than a soiled snot rag.

Glamour editor Cindi Lieve said Bono was chosen because he used his celebrity & his One Campaign organization to launch his “Poverty is Sexist” campaign on International Women’s Day (March 8th) of this year.

The One Campaign, formed in 2004, is a coalition of NGOs including The International Rescue Committee (whose board of directors is a line-up of international serial killers, including Henry Kissinger, Madeleine Albright, Condoleezza Rice, Colin Powell, & before he croaked, Elie Wiesel); Save The Children US (which in 2014 gave Tony Blair a Global Legacy Award); along with other conservative NGOS like CARE & Oxfam. It is funded lavishly by the Gates Foundation.

One wonders if Glamour cleared up the financial questions about the One Campaign which has been under scrutiny almost from the beginning for using only 1.2 percent of its donations for programs to address poverty. In 2008, ONE received £9.6 million in donations, paid £5.1 million in salaries to 120 staff members, & allocated only £118,000 to practical programs. A spokesperson explained this by saying “We don’t provide programs on the ground. We’re an advocacy & campaigning organization.”

That advocacy & campaigning stuff means Bono gets to do gigs with all kinds of do-gooder celebrities & disreputable politicians who want good press. They commiserate about lack of education for young girls, high HIV infection rates, & maternal death rates. They don’t do a damn thing about it but they do whip up pity, especially for young girls in Africa, in order to garner donations.

These campaigns–& there are several–directed at the problems of young girls are not campaigns to promote female liberation & equality. They are end runs around feminist analyses & perspectives for improving the lives of women & girls. Feminism is the theoretics of female emancipation; these phony-assed do-gooder programs are attempts to control women & their reproductive lives & usually have deep connections to eugenics organizations..

One of the other recipients this year of the Glamour Women of the Year award was Christine Lagarde, the IMF head who orchestrates austerity programs all over the world to impoverish women & create massive inequality & misery for all.

Those who believe in the rights of women & in justice have an entirely different list of respected women beginning with the women of Palestine & Kashmir & the women of the Standing Rock Sioux in North Dakota–but by no means does the list of our respected women end there.

Let’s not beat around the bush about this: Glamour magazine can take their award & stuff it where the sun don’t shine. In general, committed activists should eschew all honorifics that place them above others & accept them only if a trophy on their mantle will advance the struggles they are part of.