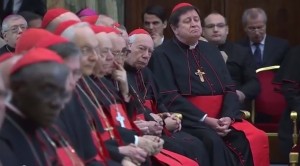 He still has silence about Gaza on his conscience, but you have to give Pope Francis his due for taking the Vatican Curia to task (publicly, no less) for “spiritual Alzheimer’s.” The video on TV news shows a bunch of very sullen men (they are ancient but age shouldn’t mean petrified) listening as he berated them for gossip, cliques & power intrigues, careerism, hypocritical double lives “typical of mediocre & progressive spiritual emptiness.” Ouch! If there were term limits for the papacy, he’s just reached one.

His predecessors must be turning over in their graves–or in the case of Benedict, over in his crypt. What’s up with this pope? Is he just grandstanding over secondary reproaches? He must have been part of that bureaucratic culture before he became pope. Will he challenge the primary issues like the place of women in Catholicism? Work to reverse the reproductive proscriptions or damnations of LGBT people who are not celibate?