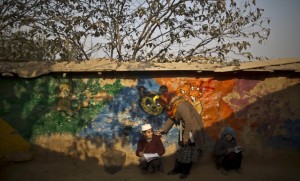 The Afghan Taliban have strongly denounced the school massacre in Peshawar by the Pakistan Taliban. This is mighty curious & merits some investigation since media has been reporting for all of the 13-year US-NATO war that the Taliban targets schools in Afghanistan (especially girls’ schools) for terrorist attacks. In fact, just two-weeks ago the Taliban were implicated (wrongly or rightly) in a teenage suicide bombing at an elite French-run high school in Kabul.

Investigation doesn’t come easy, not just because of the paucity of reliable information, but because the media is busy pumping out propaganda to justify the war & doesn’t take time to fact check or report the whole story. The heart of war propaganda is the role of US-NATO marines & bombs in liberating Afghan women from the Taliban & reality is not allowed to interfere with that narrative.

When we say information is unreliable we mean it doesn’t exist unless we consider Islamophobic websites, US-NATO generals, & disreputable NGOs reliable sources. The Taliban may well be involved in targeting schools but only a fool would take the word of such sources. A case in point would be Richard Kemp, a former Commander of British forces in Afghanistan & intelligence coordinator for the British government. (It should go without saying that “intelligence” here means surveillance & not cognitive skills so little evidenced in the British ruling elite.) In 2009, Kemp wrote: “Like Hamas in Gaza, the Taliban in southern Afghanistan are masters at shielding themselves behind the civilian population & then melting in among them for protection. Women & children are trained & equipped to fight, collect intelligence, & ferry arms & ammunition between battles. Female suicide bombers are increasingly common. The use of women to shield gunmen as they engage NATO forces is now so normal it is deemed barely worthy of comment. Schools & houses are routinely booby-trapped. Snipers shelter in houses deliberately filled with women and children.”

So with that explanation we can understand why US-NATO forces don’t discriminate against women but are all-embracing in their slaughter, taking out men, women, children, & livestock too & are not just bombing schools but entire villages, including homes, bus stations, fuel trucks, buses, cars, tractors, clinics, hospitals, mosques, power plants.

In 2009, CARE (the relief NGO) did a report titled “Knowledge on Fire: Attacks on Education in Afghanistan” & managed 85 pages without a peep about the US-NATO war & the affects of bombing on education. They admit their information is unreliable due to “under-reporting, wrong information & partial information” but they stand by it anyway. Such reliability in a 7th grade book report wouldn’t wing it past the school teacher even in a charter school.

One interesting thing the report does reveal is that the Taliban aren’t the only ones interested in Afghan education. The International Rescue Committee (IRC), Kissinger’s “charity”, & Save the Children, the disreputable group that gave war criminal Tony Blair a humanitarian award, are also engaged with Afghan education–that is, whatever is left of it after US-NATO bombings. One could consider the two organizations a weapon of mass destruction lobbed not just at Afghan education but anything they come near.

Another group that doesn’t come out smelling like a rose in an investigation is the UN who claims the majority of civilian casualties in Afghanistan are caused by the Taliban & other insurgent groups. Thirteen years of carpet bombing & the UN still can’t bring itself to condemn the US-NATO war. It still runs interference for colonialism.

Millions of Afghan refugees fled to Pakistan & Iran–& it should be mentioned there are reports that fleeing vehicles were bombed on the roads. Millions live in slums & mud huts & get their education al fresco. This is a school for Afghan refugees outside Islamabad, Pakistan.

US-NATO out of Afghanistan! The only hope for Afghan education is the end of this barbarous war.