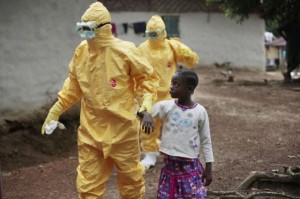 There are so many questions posed but not answered about the Ebola epidemic in Guinea, Sierra Leone, & Liberia, three of the poorest countries in the world. Where thorough investigation is required, we get piecemeal reports that don’t add up to a coherent narrative. This is when you see US media expose its real character because while health organizations project the spread of Ebola in West Africa to potentially 1.5 million people by early next year, US media is focused on a couple US citizens who contracted the disease & is scare-mongering about ISIS suicide agents coming across the US border to terrorize with biochemical warfare. This is where white supremacy dovetails with propaganda & a grand switch & bait to distract from the travesties & abominations of neoliberal healthcare in Africa–& possibly the application of the racist triage theory where elite academics & politicians consider it more merciful to let people without a function under neoliberal plunder simply die miserably.

The ecology of Ebola is not well known, or at least is not consistently elaborated. But the first reported breakouts were in Zaire (now the Democratic Republic of the Congo) in 1976. There have been 34 episodes since then in several central & western African countries with an estimated death toll of over 4,000 deaths (certainly a lowball estimate). The reported death toll in Western Africa during this episode is nearly that figure now. The US Center for Disease Control (CDC) calls this epidemic “the largest in history”; the World Health Organization (WHO) calls the current epidemic “a public health emergency of international concern.”

We haven’t heard from any public health agencies in the affected countries because even primary healthcare is in a shabby state under neoliberal regimes. Liberia has two treatment centers for Ebola victims, one with only eighteen beds. Mostly people have been dumped in squalid quarters without beds & no medical personnel. Or they’ve been left to die in their homes & in the streets. The Nobel Peace Prize winning president of Liberia is too busy building up a military arsenal to provide for public health. In nearly 40 years of Ebola episodes, no public health agencies comparable to the CDC have been established in the affected countries so that pronouncements about Ebola come from Geneva (WHO) & the US (CDC).

Many articles describe the reluctance of Liberians to go for treatment as though it were ignorance & superstition. Photojournalists show government teams going out to communities to educate & bully. (Would that people in the US were as “superstitious” about their own regime!) If you know victims are simply dumped in empty buildings without medical treatment, are sprayed down with some kind of decontaminant like they were livestock, are left to die in the streets, & corralled into guarantine, that “superstition” is the height of wisdom & self-preservation.

Médecins Sans Frontières (Doctors without Borders), who have been treating Ebola epidemics in Africa for 20 years, issued two reports (July & August 2014) excoriating in the frankest diplomacy the criminal failures of what they term the “humanitarian system” to address this epidemic. Their report titled “Where Is Everyone?” takes everybody in that system out, including the UN, WHO, the so-called “international community”, & NGOs. They said without batting an eyelash in apology: “the UN is “at the heart of the dysfunction.” NGOs are no-show & government humanitarian aid has been promised but not delivered.

Their damnation is worth quoting in whole. In the past 20 years, they say “operational capacities in the United Nations system have been gradually reduced through reforms. For example, the restructuring of the World Health Organization in Geneva has led to the closure of its viral hemorrhagic fever unit. Member states should be held accountable for an unceasing reduction of response capacity. A destructive spiral has materialised, leading to what we see today: lack of leadership, deficient coordination and, last but not least, a striking absence of operational capacity. This is compounded by the fact that the international community simply doesn’t feel responsible for responding to what is happening in regions that are not perceived as politically or economically interesting.” In other words, no one is doing a damn thing to address the suffering & save the lives of millions of people in central & west African countries. That’s where the media switch & bait comes in: to disguise this treachery behind alarmism about Dallas being taken out by Thomas Duncan & ISIS coming over the border with bags of Ebola vomit.

This little girl is 9-year-old Nowa Paye being taken to an ambulance after showing symptoms of Ebola infection in a village 30 miles north of Monrovia, Liberia (Sept 30th). Can you imagine what it’s like for a small child to be carted off by some stranger in a space suit with no certainty for her family she will ever return or that she will receive medical treatment!?